Butterfly Effect Series
Previous
Next
John Ruskin wrote: “The noblest scenes of the earth can be seen and known but by few… The sky is for all……It is fitted in all its functions for the perpetual comfort and exalting of the heart, for soothing it and purifying it from its dross and dust. Sometimes gentle, sometimes capricious, sometimes awful, never the same for two moments together; almost human in its passions, almost spiritual in its tenderness, almost divine in its infinity…….And yet we never tend to it, or make it a subject of thought.” (‘Modern Painters I: Of Truth of Skies’, 1843). 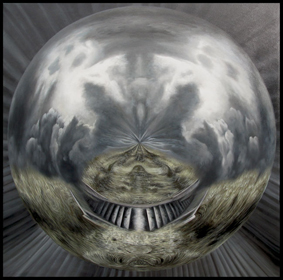 I believe in life’s ephemera. Everything we experience is in motion, - in continuous flow. Nothing stays still forever. Nations are built; wars are fought; political parties are formed. What once seemed vital gets forgotten. We are all living and dying in the same moment, - at the same time, and to try and capture a moment in time as ‘truth’ becomes futile as you are often left with something that is essentially false or lacking somehow. Permanence is the ultimate illusion.

The work above “Stairway” was inspired by the writings of John Ruskin and is one of a series of works called ‘The Butterfly Effect’ (see portfolio for more). It incorporates ideas from Ruskin’s writings “Modern Painters I: Of Truth of Skies” and what he later deemed the ‘plague-cloud’ in a lecture in 1884. This as well as the ideas behind Edward Lorenz’s talk in the 1970’s about whether the flap of a butterfly’s wing in Brazil could cause a tornado in Texas, are all part of the thinking that inspired this series of works.

Ruskin writes: “The noblest scenes of the earth can be seen and known but by few………The sky is for all……It is fitted in all its functions for the perpetual comfort and exalting of the heart, for soothing it and purifying it from its dross and dust. Sometimes gentle, sometimes capricious, sometimes awful, never the same for two moments together; almost human in its passions, almost spiritual in its tenderness, almost divine in its infinity…….And yet we never tend to it, or make it a subject of thought.” (Modern Painters I: Of Truth of Skies, 1843)

However Ruskin’s belief in the inspiring benevolence of nature turned sour in his later life as he lived through the industrial age of the 1800’s and saw how social morality and poverty was ignored for wealth, greed and political power. Like William Blake from his “Songs of Innocence” to his “Songs of Experience”, Ruskin also left the Eden of his earlier thoughts behind and writes with jaded view what he sees as a ‘plague-cloud’ (or smog) that blights the sun from the city’s skies and in doing so blights our moral senses too:
“Blanched Sun, - blighted grass, - blinded man …..Whether you can affect the signs of the sky or not, you can the signs of the times. Whether you can bring the sun back or not, you can assuredly bring back your own honesty.” (Ruskin, The Storm-Cloud of the Nineteenth Century, 1884)

Ruskin’s sombre tone and use of the weather as metaphor here is clear. Man has betrayed the natural world and his own moral nature; now nature, inevitably and ruinously, will betray man.

However my work in this series is not about apocalyptic moral warnings to society or indeed about over dramatising climate change. My role here is to open doors to discussions and enlightened thinking. The works also incorporate ideas about chaos theory and the nature of creation itself. Nature’s ability to duplicate and self-organise within an evolutionary framework are all things I find fascinating. They are all part of the flow of life.

For example, Edward Lorenz, a meteorologist working at MIT, believed that he could use a mathematical computer system to predict the weather, like Newtonian mathematics predicts the fall of a projectile or the path of a planet through space. However what he observed from his data was that any small change at the beginning of his calculations, as insignificant as up to a hundred-thousandth of a decimal place, could produce a massive swing in his final predictions. It had nothing to do with external influences or human error. He noticed that unpredictable outcomes could be generated from the mathematical system itself. It led him to ask the question about whether the flap of a butterfly’s wing in Brazil could lead to a tornado on the other side of the world, using the same logic.

His mention of a ‘butterfly effect’ concept created a powerful image within science and the world at large, and the Newtonian idea that mathematical equations could give you the power to predict how systems would behave was falling sway. Unpredictability is everywhere and is hard wired into every aspect of the world we live in. The stock market could crash at any time; we could be wiped out without warning. The sky could indeed fall in.

Chaos theory is woven into the basic laws of quantum physics and is accepted today as a fact of life. But the very things that make it unpredictable also allow it to create pattern and structure as well! Order and chaos, - the two are deeply linked. Systems like the weather behave in complex unpredictable ways but are based on simple mathematical rules. These rules in turn have a unique property known as coupling or feedback, where the rule feeds back on itself and each output then becomes the input for the next set, and so on.

Like evolution, if the system is left to keep on going the rule can give rise to infinitely complex outcomes and patterns. It can even explain why life exists on earth and how inanimate matter can spawn intelligence. Design in nature does not need an active interfering designer- it is an inherent part of the universe itself.

And it is this, as well as Ruskin’s moral interpretations of the sky and his times, that I find extremely fascinating because they are both exceedingly relevant and poignant for us today. I believe, like Ruskin in the attempt to see things clearly and enable us to celebrate what is larger than our own lives. Looking up at the skies has an unnerving effect on our sensibilities. It is humbling in its very nature. We experience the skies with apprehension and are reminded that we are not all powerful. Yet at the same time we are also reminded that we are alive, and that our lives are governed by ‘the knowledge of the existence of something unfathomable to us, the manifestation of the most profound reason coupled with the most brilliant beauty’.
Next
Previous